There is no coastline but with its spectacular Andean landscape and Amazon region, Bolivia is a dream for trekkers and adventurers! Altitudes range between 70 meters in the lowlands of the northeast to approximately 6,500 meters in the Andes (Sajama Volcano 6,542m), in the west of the country. A trip to Bolivia is not only naturally worthwhile but also an impressive and fascinating cultural experience. Furthermore it is a cheaper travel destination than Peru and especially Chile.

• La Paz & Huayna Potosi: Situated at an altitude of around 3,650m, La Paz is literally the highest seat of a country's government in the world – the capital is Sucre. Therefore temperatures are much cooler than in the country's tropical lowlands. The city is an important political, economic and cultural center and offers beautiful views of the surrounding mountains. In 2015 it was officially recognized as one of the cities being part of the New Seven Wonders. 25km north of La Paz lies the mountain Huayna Potosi (6,088m) which is a popular target for climbers. According to its height it's supposed to be RELATIVELY easy to reach the summit but that doesn't mean it IS easy! I  got trapped in an unexpected snowstorm at around 5,500m and my whole beard was covered with ice – so be warned. It's a very tough and literally breathtaking challenge!! Many agencies in La Paz offer Huayna Potosi climbing packages. Make sure to compare them as they may vary in the quality of the equipment. Usually two-day tours are offered, but keep in mind that a three-day tour might be worth the extra money since it includes an additional acclimatization day on the mountain.

• Salar de Uyuni & Southern Altiplano: The Altiplano, stretching from southern Peru all the way through western Bolivia to northern Argentina, is the most extensive area of high plateau in the world, except for Tibet. In the southwest of Bolivia's Altiplano next to the town of Uyuni, you can find the world's largest salt desert called Salar de Uyuni. This surreal setting is popular with tourists but definitely worth a visit and many people describe it as their personal highlight. This place is not only great for landscape photography but also perfect for taking very funny shots with you posing on your travel mate's head or being trampled to death. Check out some examples in our photo gallery :) Tours are usually booked in Uyuni or La Paz. 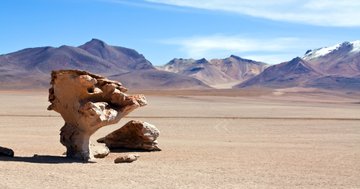 • Lake Titicaca & Isla del Sol: Lake Titicaca (altitude 3,812m) is the largest lake in South America and situated on the border of Bolivia and Peru. It offers beautiful scenery and great hiking options. Overland travels from Peru to Bolivia often pass the Bolivian town of Copacabana which is located right on the shore. Spend a few relaxed days here if you are not in a rush. Furthermore Copacabana offers regular boat links to the picturesque Isla del Sol. Although tourism is increasing it is still possible to enjoy the beauty of the island. Lots of traditional farming and fishing families and many Inca-ruins give you the feeling of travelling back in time! When I went there in 2011 I crossed the whole island by foot to get away from the touristy parts where the boats arrive, which was rewarded by great photographs.

• The Bolivian Amazon: If you are in for an Amazon adventure you can choose between jungle and pampas trips (or do both) in the northern and eastern lowlands of the country. Both can easily be arranged in La Paz or the jungle town of Rurrenabaque on the banks of the Rio Beni which can be reached by public bus (18 hours, 10 dollars) or plane (Amaszonas Air, 35 minutes, 80 dollars or TAM Air) from La Paz. On jungle trips you will explore the rainforest with its dense tropic vegetation and impressive biodiversity. You may also visit local communities and learn about the indigenous culture and way of life. In contrast the pampas is a wetland area with less dense vegetation that makes wildlife spotting (e.g. capybara, anaconda, jaguar, monkeys) easier. Nearly all transportation is done by boat. In 2011 I went on a four-day jungle trip with basic accommodation next to the community San Miguel del Bala as well as to the Madidi National Park. Great stuff!!