This fascinating country in the northeast of Africa was home to the world's greatest civilization some thousands of years ago and therefore offers breathtaking historic monuments of unmeasurable value. The country consists of endless desert landscapes which forces the majority of its citizens to settle along the mighty Nile River. In the north you find the Mediterranean Sea, in the east the Red Sea which offers a huge biodiversity, thus making it a famous diving destination. Egypt is comparably cheap and easy to travel. But due to the unstable political situation make sure to check the current travel advice of your country's Ministry of Foreign Affairs before you do so.

• Pyramids of Giza: This impressive Wonder of the World has been existing for almost 4000 years. The ancient Egyptians believed in eternal life and built these up to 150m high pyramids as the pharaoh's (son of the gods) tombs to become one with the cosmos. Riding around the pyramids on the back of a camel was an unforgettable experience which I highly recommend.

Tip: Please note that this place is extremely popular with tourists! Therefore it’s best to visit the country's inland during the low season (June to August). But don't forget to bring enough sun protection! Day temperatures can rise above 40 degrees Celsius which can give you the feeling of being roasted especially in the cities. Getting up early and exploring similar places before noon is a good idea.

• Oases & White Desert: The huge Western Desert offers stunning isolated landscapes and is the least visited part of Egypt. Five oases are spread over this vast and rugged beauty: Al-Kharga, Dakhla, Farafra, Bahariyya and Siwa of which the first four are connected with each other by the main road #10. Siwa oasis is more remote and close to the Libyan border.

Tip: When I went to the Western Desert I took the bus from Cairo to Bahariyya where I stayed at Badry's Sahara Camp. It's basic but has a beautiful atmosphere and very friendly and knowledgeable staff that can show you around or take you on multi-day tours. My personal highlight was a two-day tour with an overnight stay (camping under the stars!!) in the amazing White Desert between Bahariyya and Farafra. Check out the video and photos for more impressions.

• Luxor & the Nile River: From the airplane the Nile River looks like a green snake, winding through the yellow-brownish desert landscape all the way from the Sudanese border in the south to the Mediterranean Sea in the north. Around 80% of the Egyptian population live along the ever-fertile river banks and use its 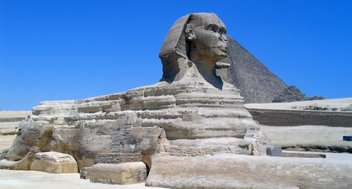 water for irrigated farming. It's beautiful to watch them living their daily life. It is not surprising that also the majority of the historic monuments are concentrated along the Nile. Multi-day Nile cruises are a good way to discover these things. You can either go on a large motorized cruiser or on a chartered felucca (smaller & cheaper sailing boats with flexible schedules). The most popular river part for cruising the Nile is between Aswan and Luxor. Especially the city of Luxor and its surroundings host numerous world famous ancient sites such as the Valley of the Kings, Hatshepsut Temple, Luxor Temple and Karnak Temple. Magnificent places!

Tip: I went on a cruiser back in 2008 which was very nice but I would choose a felucca next time. Because of the small size and a local captain, it is supposed to feel much more private and authentic. Book your trip in Aswan once you arrive there from your oases-trip.

• Diving in the Red Sea: Egypt's Red Sea coast stretches for more than 800km from the Suez Canal all the way south to the border of Sudan. It also includes the coastline around the Sinai Peninsula. Because of its beautiful turquoise waters, world class coral and a huge variety of tropic fish, this area is the first choice for European scuba divers. Although up to 80% of the coral at the tourist hotspots of Hurghada and Sharm el-Sheikh have been damaged, there are still a lot of pristine dive sites left such as Ras Mohammed National Park at the southern tip of the Sinai Peninsula and around the many offshore islands further south. The most famous shipwrecks (e.g. The Thistlegorm) are found close to the Suez Canal. When I went diving in Egypt in 2008 and 2013, I went to the outer reefs of El Gouna and Safaga with the very well-organized Orca Dive Schools. It was brilliant! Check out the video and photos if you are interested. Next time I would like to explore Ras Mohammed National Park and the far south.

Praying in the Desert

Feluccas on the Nile River, Aswan