• Jökulsárlón: It is a large glacial lake in southeast Iceland, on the edge of Vatnajökull National Park, where the  glacier Vatnajökull drops huge icebergs into the lagoon that float to the connecting ocean.  The lake covers an area of about 18 km² and can be seen and easily reached from Route 1 between Höfn and Skaftafell. Additionally, an outstanding view of the ice cap, a vast dome of ice that rises to a height of 910 meters, is provided. The best way to explore this lagoon is by boat. You can book tours online at www.extremeiceland.is (booking in advance is recommended). During the boat excursion you are going to sail among the huge icebergs in the picturesque scenery of Jökulsárlón. Usually, some seals are around and might accompany you.

Tip 1: Also stop  at Fjallsárlón, which is a small lagoon near  Jökulsárlón. It is not  well-known and therefore rarely visited. Nonetheless, the views might be even more stunning.

Tip 2: Think about doing a guided ice cave tour starting from  Jökulsárlón (via www.guidetoiceland.is/).  Even though it seems really expensive, it is totally worth the money!

Tip 3: This is a beautiful spot to cath some northern lights. You will find the forecast on this page: http://en.vedur.is/weather/ forecasts/aurora/

• Golden Circle: On the totally recommended Golden Circle tour in South-West Iceland you are going to visit some of Iceland’s most impressive sights, starting with the Geysir geothermal area where the Strokkur shoots a column of water up to 30 meters into the air every 4 to 8 minutes in a thrilling display of nature’s forces. Another highlight is the huge iconic Gullfoss waterfall, created by the river Hvítá. The water plummets down 32 meters in two stages into a robust canyon which walls reach up to 70 meters in height. On a sunny day even a shimmering rainbow can be seen over the falls. Furthermore, the Golden Circle tour also includes the geological wonder of two tectonic plates (American and Eurasian)  pulling apart at a rate of a few centimetres per year. You will be able to see this natural spectacle in Thingvellir National Park.

Tip: Visit Peningagja in Thingvellir National Park to toss a coin into the icy-cold water and make a wish. Due to the coins, the water beautifully shimmers. 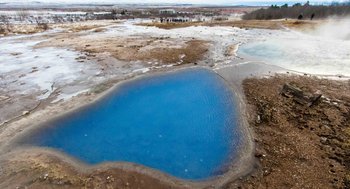 • Seljalandsfoss: Due to its beauty, it is one of the best known waterfalls in Iceland. Seljalandsfoss is located in the South Region between Hvolsvöllur and Skógar and even in the winter times easily reachable from Route 1. It  is  part of the Seljalands River that has its origin in the volcano glacier Eyjafjallajökull. The interesting attraction is that visitors can walk behind the waterfall into a small cave and watch the water drop 60m. You are really able to feel the power behind this natural spectacle. Do not forget to wear rainproof clothes as you might get wet all over.

Tip: Watch the sunrise at Seljalandsfoss because tourist busses will appear shortly after.

• Hveragerði: This small town is located 45 km from Reykjavik and  may be seen from the vantage point of the Kambar mountain slope as it spreads out across a 5,000 year-old lava field.  Hveragerði's most spectacular attraction is its geothermal park with many naturally located hot springs and beautiful hiking trails.  Troughout the year, pillars of steam from the numerous hot springs can be seen rising up out of the ground and depict a picturesque landscape you barely get to see in your life. This geothermal park is easy reachable from the main road and is open every day in the summer time. During off season time you should contact the local information office which arranges group tours upon request.

Tip: Ask locals for places where to boil some eggs in the hotsprings or bake the famous black bread   using the geothermal ground as an oven.

To have lunch or dinner, you should visit one of the restaurants (one is located only 50 metres from the Geothermal Park) that use the geothermal heat for its outdoor kitchen. You'll find more information on http://www.hveragerdi.is/English/.