This small desert kingdom with its great history is a fantastic travel destination! Besides well preserved monuments from various ages, biblical places, desert castles and Bedouin culture, Jordan offers amazing landscapes such as the Dead Sea, Wadi Rum or Dana Nature Reserve and not to forget the submarine world of the Red Sea.

• Petra: Declared as one of the "new" Seven Wonders of the World and known from the movie "Indiana Jones and the Last Crusade", this Nabatean stone city is mindblowing! Check out the video and photos for visual impressions.

• Wadi Rum: This magnificent desert and mountain landscape also known as "The Valley of the Moon" was one of the background settings in "Lawrence of Arabia" and in many science fiction films set on Mars. The area is now one of Jordan's most important tourist destinations and attracts particularly trekkers and climbers, but also people looking for multi-day camel and horse safaris or simply day-trippers from Aqaba or Petra.

Tip: It's worth to spend some extra money to sleep under the stars at one of the Bedouin-styled camps in the desert! If there is still money left consider taking a hotair balloon to admire this incredible landscape with its stunning colours from above!

• Dead Sea & Wadi Mujib: The Dead Sea is actually a big lake bordering Jordan to the east and Israel and the West Bank to the west, without any connection to the Mediterranean or Red Sea. Because of the extreme heat and therefore huge evaporation at the lowest point on earth, the salinity is about nine times higher  than in other oceans. The Jordan River, that used to feed the Dead Sea, nowadays does not bring enough water anymore so that the water level of the Dead Sea is constantly dropping and the water gets even saltier. 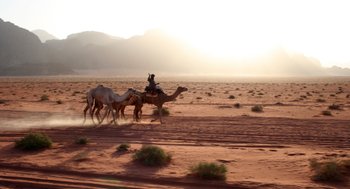 Swimming is not a pleasure since a single drop of saltwater in your eyes will make them burn like hell and you will discover cuts that you haven’t even noticed before. So don't swim but just relax and float! You can easily sit on the water and read a newspaper – don't miss this crazy experience!! Tip: Make sure to only float where freshwater showers are available to immediately wash off the very uncomfortable salt crusts on your skin. If you are not staying at one of the first class hotels along the lake shore ask them for their (much cheaper) day rates to use their facilities and beach access.

Wadi Mujib is situated about 20km south of the Dead Sea resorts. There are fantastic hiking options in the reserve of which I did the wet Siq Trail, an exciting 2km wade into the gorge through natural pools, ending at a dramatic waterfall. Definitely one of my Jordan highlights!

• Jerash: The ruins of this former Roman city with about 20,000 inhabitants are remarkably well preserved. The stunning monuments include triumphal arches, temples, churches, colonnaded streets, amphitheaters, bathhouses, fountains, a massive forum and even a hippodrome. To wander through this magical place feels like travelling 2000 years back in time! Highly recommended!!