Malaysia is economically one of the more developed countries in Southeast Asia, especially because of the palm oil boom since the 1980s. Also the notably considerate traffic without risky overtaking maneuvers and permanent honking like in Indonesia or Sri Lanka, makes the country a good destination for travelers going on their first backpacker trips and  might prevent them from a culture shock.

• Mt Kinabalu & Kinabalu National Park: This wonderful national park, a World Heritage Site, including the 4,095m peak of Mount Kinabalu is very popular among climbers and trekkers. There are numerous trails and lookouts around the base of the mountain that can be explored independently. Though, it is also possible to go on one of the guided tours that start from the Sabah Parks Office at 11am every day. If you decide to climb the peak, which is the highest of Malaysia, you should take two days into account including overnight camping on the mountain. You can arrange climb packages through nearly every tour operator in Kota Kinabalu (the capital city of Sabah which is located about 80km west of the national park).

• Watching orangutans in the wild: It is a fantastic experience to observe our closest relatives in their natural habitats. But because of deforestation and incredibly widespread palm oil plantations, the numbers of orangutans in the wild are constantly dropping. Nevertheless there are some beautiful national parks, conservation areas and forest reserves that make encounters still possible. Depending on the number of tourists you want to be surrounded by I (Chris) can recommend the following places: The Sepilok Orangutan Rehabilitation Centre and its surrounding 40 sq km forest reserve guarantees sightings because of the big number of rehabilitated animals which are even fed at a platform twice a day. But please note – this is one of the tourist hotspots in Malaysian Borneo! Other options to spot orangutans in the wild among fewer visitors (although you need to be a bit lucky) are for example Kinabatangan River, Danum Valley Conservation Area, Deramakot Forest Reserve and Tabin Wildlife Reserve.

Tip: During my stay, I chose to visit Deramakot Forest Reserve to keep the number of other travellers to a minimum. There are some bumpy roads leading through the area which are used by the trucks of the legal logging companies. As footpaths are limited the main way of exploring the jungle is on 4 WD safaris in the morning, during the day and at night. We spotted orangutans three times and furthermore some wild cats, gibbons, flying squirrels and deer. Proper accommodation (concrete bungalows with air-condition and attached bathroom) and food is available.

• Diving Sipadan Island: This picturesque little island with its palm fringed beaches is part of the Semporna Archipelago in southeastern Sabah and supposed to be one of the best dive spots in the world. The coral is impressive (although not world class) but without doubt the “big stuff” is the highlight. Numerous turtles, bumphead parrotfish, reef sharks, schools of barracuda and jackfish are at present and, if you are lucky, even manta rays, hammerhead and whale sharks.   Please note that the government limits the number of visitors by issuing 120 permits per day.

Tip: Try to apply for one at your dive operator as early as possible. It’s unlikely you can show up in Semporna and find an operator willing to take you to Sipadan the following day. Because a dive package usually only includes three dives per day, I (Chris) recommend trying to get more days at Sipadan to explore even more dive sites there. Furthermore, there are some other (more touristic) islands such as Mabul and Kapalai whose submarine worlds are also well worth exploring. Both offer world-famous macro diving. Diving Sibuan Island, however, was disappointing because of huge amounts of rubbish and dead coral. Check out the video to get some impressions of diving the Semporna Archipelago. 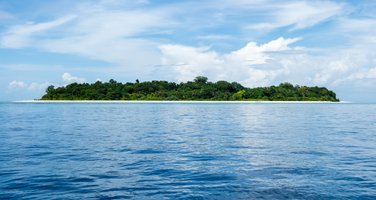 • Maliau Basin Conservation Area & Batu Punggul: If you like trekking and exploring virgin rainforest then the remote Maliau Basin Conservation Area in the southern part of central Sabah might be perfect for you. It’s possible to drive to the park independently or just take a public bus from Tawau or Kota Kinabalu. If you book a multi-day-package through one of the numerous tour companies (e.g. Sticky Rice Travel, Borneo Adventure, Borneo Nature Tours) they will take care of all transport, accommodation and activities. Once you are in the area it might be interesting to combine your trekking in Maliau with a visit to Batu Punggul at the border of Kalimantan (Indonesia). This bizarre jungle-topped limestone rock formation rises nearly 200m above the Sungai Sapulot area and offers spectacular views across deep jungle and even more limestone outcrops. Please note that due to its remoteness it can be difficult and relatively expensive to get here.

• Kinabatangan & Segama River: Kinabatangan River is the longest River in Sabah and very famous among tourists for wildlife river cruises. Many tour operators run lodges along the river banks or they cooperate with locals who offer homestays. The reason for the high wildlife density (e.g. primates, monkeys, tarsiers, birds, pygmy elephants, crocodiles, snakes, clouded leopards) found here is depressing though – huge palm oil plantations flank the river course and force the animals to the small parts of rainforest that are left along the riverside. All travel agencies can arrange multi-day-trips to the area. Southeast of the Kinabatangan River flows the less famous (but not less beautiful) Segama River.

Tip: I (Chris) tried to avoid the masses of tourists, so I chose a homestay there with a local fisherman family in a tiny village called “Dagat”. Staying at this extremely beautiful place, which I can highly recommend, was definitely one of my Malaysian highlights! For more information about the Dagat Tabin Homestay, check out my insider tips below.

• George Town/Penang: George Town is Penang's capital city. Even though  it has around 750.000 inhabitants, its eastern tip appears as a small village and pictures the heart of  George Town. By foot you can explore many cultural highlights like churches, mosques, Hindu and Buddhist Temples. By the way, the oldest portion of the city centre has been designated by UNESCO as a World Heritage Site since 2008. Recognised as having a 'unique architectural and cultural townscape without parallel anywhere in East and Southeast Asia', George Town contains one of the largest collections of pre-World War II buildings in Southeast Asia and is considered an architectural gem. Don't miss its awesome street art and small cool bars and coffee shops in Love Lane. I (Lena) totally recommend "Wheeler's coffee shop" - its atmosphere is just amazing! Moreover, you should grasp some fruits and food on the streets and and visit rainforest bakery.

Trainride along the Padas River

During my research on how to avoid the tourist masses and visit authentic places on my trip, I came across the tour agency Adventure Alternative Borneo. I took notice of the small Dagat village (Lower Kinabatangan Segama Wetlands) and the Dagat Tabin Homestay of the Ramsa Family. This authentic remote fishing village just north of Tabin Wildlife Reserve with its basic living conditions is threatened by the growing rural exodus. Young people leave the place searching for a better life perspective either in cities like Sandakan or as workers on one of the palm oil plantations or oil mills. Only about 20 out of 200 people are left in this traditional fishing village. A few years back the situation was in fact quite hopeful since there was a small but steady flow of eco-tourists. But tragically, the so called Tanduo Incident in 2011 where Philippine militants arrived in Lahad Datu to assert the unresolved territorial claim of the Philippines to eastern Sabah changed everything. Although the conflict ended in 2013, the region has still not reached its previous tourist numbers. Together with the inhabitants that are still left in his community, a son of the Ramsa Family, called Najib, is trying to cooperate with several NGOs to get attention for the situation of the village. One NGO made a video clip that shows the challenging situation of the Dagat people. If you are interested...

Until now Najib Ramsa and his family have not given up trying to restore sustainable tourism, to revive his village and offer better perspectives for its inhabitants. The signs should be promising as the beautiful landscape and amazing wildlife allow lots of great activities such as river cruising, shrimp fishing or jungle walking. If you are an open-minded, adventurous traveller that wants to escape from the tourist masses and experience the authentic life of local fishermen, then the Dagat Tabin Homestay in the Lower Kinabatangan Segama Wetlands is your perfect destination. During my stay I made lots of film recordings and created a short video clip, so that Najib has the opportunity to introduce his beautiful home to the world. Check it out below! If you decide to visit his place during your trip to Sabah you can contact him by email at:  njbrms3[ät]gmail.com or homestaydagat[ät]gmail.com. His phone number is      +601131623518 (Whatsapp available).

You can reach Dagat village by taking a public bus between Kota Kinabalu/Sandakan and Lahad Datu on Highway A5/AH150. Just tell the driver to drop you off at Jeroco junction about 15km northwest of Lahad Datu. From here Najib can pick you up. The three hour drive on a dirt road mainly through palm oil plantations is followed by a 15 min boat ride. Not very comfortable but well worth the effort (greetings from the German Chris :) )!