• Dead Vlei/Sossusvlei: These two spectacular attractions are situated in the Namib-Naukluft National Park, which is Africa’s largest conservation area. The whole national park is a dream for photographers since it pictures one of the most fascinating landscapes on earth. The red sand dunes are some of the highest of the world by reaching almost 400 meters. Together with their black shadows, rocky-mountains, rolling plains, animals and plants, they create a stunning atmosphere and one of the most incredible eco-systems in the world. Sossusvlei is known as the most popular vlei, whereas Dead Vlei is said to be the most beautiful one. It is characterized by pitch-black dead Camel Thorn Trees, a white clay pan and rusty-red sand dunes. For instane,  Big Daddy, which is supposed to be the highest dune in the world. Note that Dead Vlei is only reachable by foot (15-20 minutes walk), so make sure to take enough water with you!

Tip: Another nice way of experiencing the oldest desert of the planet is in a hot air balloon.

• Etosha National Park: This 22.000 m² area gets its name from a large 5.000 m² endorheic Etosha salt pan and is the right place for any kind of safari. The national park is home to hundreds of species of mammals, birds and reptiles, including several threatened species such as the black rhinoceros. We got to see the ‘Big 5’ within three days doing our own non-guided safari tour. In every camp, you should check the safari books, where and what kind of animal has been seen the other day. By doing safaris on your own, you'll save a lot of money! 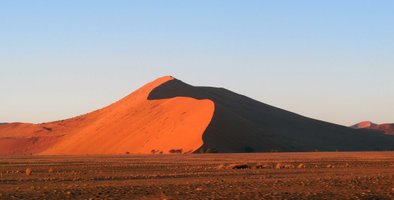 • Swakopmund:  The city was founded in 1892 as the main harbor for German South-West Africa and is a great example of German colonial architecture. Today, a small part of its population is still German-speaking.

• Cape Cross Seal Reserve: On your way, you should totally stop at Cape Cross, which is a small headland on the South Atlantic Skeleton Coast. This protected area is home to one of the largest colonies of Brown Fur Seals in the world.

• Fishriver Canyon: This canyon is the largest in Africa, as well as the second most visited tourist attraction in Namibia. Even though you might finally meet other backpackers, it is totally worth hiking there. There are a number of footpaths, the longest follows 88 km of the Fish River and usually takes five days. Important to know is that there are no amenities on the trail and hikers have to carry all their needs with them. Excellent public view points are near the camping side Hobas! Also visit the hot springs resort of Ais-Ais at the lower end of the Fishriver-Canyon.

• Quivertree Forest: We loved this place! It is all and only about quivertrees and they depict an awesome photo motive.