From a European point of view, New Zealand doesn't seem to be situated on the other side of the world. It doesn’t convey the exotic wilderness feeling you associate with the deserts or coral reefs countries like Australia have to offer, but it combines the best of Europe's nature on a relatively small scale in a very impressive way: The Alps, a mountain range system in Central Europe, with their glaciers, the fjords of Norway, the beaches of the Mediterranean Sea, the volcanic landscapes of the Canary Islands, the Surf of Portugal/France, hilly pasture landscape which can be found in parts of Western Germany and so on. What is even better: Most of these places are a lot less crowded than Europe. We travelled New Zealand (North- and South Island) for two months with a camper van back in 2006. There are many great places and things to do but if I needed to pick only a few, I would definitely recommend the following ones:

• Tongariro National Park (North Island): With its mighty, active volcanoes, Tongariro is one of New Zealand’s most spectacular parks, which furthermore embodies the role of Mordor in the Lord of the Rings trilogy. Tongariro Northern Circuit is a brillant three to four days hike across stunning landscapes. If you are short of time or do not want to camp in the park, you should do the Tongariro Crossing, which is probably the best (one) day walk in NZ! It takes about 8 hours to complete and contains some steep sections but the views on a clear day are magnificent. Covering the most spectacular landmarks of the Tongariro Northern Circuit, this trip is highly recommended. Check out the photos and the video to get some impressions.

• Mt Taranaki (Mt Egmont) (North Island): On a clear day, this impressive volcano (2.518 m) is definitely worth a visit! With its perfect shape it used to be a stand-in for Japanese Mt Fuji in the Hollywood movie "The Last Samurai" starring Tom Cruise. 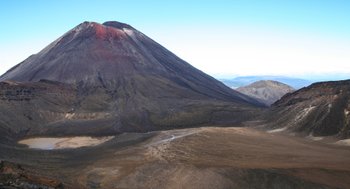 Tip: Although it is possible to climb the volcano itself, a nice alternative is to trek up a smaller peak in the north which offers amazing views of Taranaki. Check out the map to find this hidden spot where I took my pictures of Mt Taranaki.

• Abel Tasman National Park (South Island): Sea kayaking this beautiful area on the northern tip of the South Island was definitely one of my NZ highlights! Fully equipped with camping gear, we started in Kaiteriteri and paddled along pristine beaches and bays for three days stopping whenever we wanted and wherever we wanted. Only the camp sites had to be chosen in advance. Tip: Try to stay at least one night at Mosquito Bay which is probably one of the most beautiful places on the planet!

• Fiordland National Park (South Island): This spectacular region in the Southwest of New Zealand is a paradise for nature lovers! The wild and unspoiled area consists of dramatic fjord landscapes and lush forests. There are some fabulous multi day hikes of which Milford Track is the most famous. The fjords can also be explored from the air (expensive!), by boat or sea kayak. We joined a boat cruise passing through Milford Sound and hiked the three-day Routeburn Track which was fantastic!

On the way to Arthur's Pass

Some of the 30 million sheep